I'm so happy that you're blogging at Heartstrings today. Congratulations on the release of your Contemporary Romance, Dixie Cowboy.

Dolores: Thank you so much for allowing me to be here. I've been following your

Heartstrings Blog from the beginning. I love the questions you ask.

Vickie: I appreciate that. Dixie Cowboy is a sweet southern romance set on a guest ranch in Georgia. Have you ever been to a guest ranch or a dude ranch?

Dolores: I've never had the privilege of staying on a dude ranch, but I have taken two day trips to Wyoming and Colorado. We rode a couple of stage coaches out where the buffalo roam. There a bunch (?) pack (?) herd (?) of great-looking cowboys rustled up steaks and fixings in a chuck wagon.

Vickie: Most of us have a favorite book, but I want to get specific and ask, what's your favorite romance book, and why did you choose that one?

Dolores: I've always been fond of the western romances. I'm not sure I can narrow it down to one. MONTANA WOMAN by Rosanne Bittner, THE WABASH SERIES by Dorothy Garlock, and anything Lavryle Spencer has ever written especially TWICE LOVED.

Vickie: I know that one of the things you love is to travel. Will you tell us a few of your favorite funny stories of your travels?

Dolores:  My Sweet Meadow Series (Bertie Byrd-Fortney) contains many of the true stories of my life. Because we were just visiting with friends and relaying humorous stories of staying in campgrounds, this story comes to mind.

Richard and I were on our way to Pigeon Forge, Tennessee for a car show. We were pulling a VERY LONG trailer with two vehicles in it. We were to meet some friends at a certain campground halfway to the car show. It was late when we got there. Everyone was in bed. There were no pull-thru sites, so Richard had to back the trailer and motor home into a space. He gave me a flashlight and told me to watch him backup and shine the light into the driver's side mirror when he needed to stop. Of course, that meant I was standing in the dark, palmetto bush site.

As he got closer to where he would need to stop, I raised the flashlight and prepared to turn it on when it was time. All of a sudden, Richard slammed on the brakes, put the bus in park and came flying out the door. We had a short exchange which I don't think I'll repeat here, but the gist of logic was that he didn't want me to point the flashlight if I didn't intend to use it. He asked, "What if you were pointing it to tell him to stop, but it wouldn't come on?" The gist of my response was that I would like to make a suggestion as to where he could park the flashlight. To this day, I have never helped him park our vehicle.

Vickie: In your circle of friends and acquaintances, you're famous for your cooking. Do you have a favorite recipe, and will you share it with us?

Dolores: My favorite recipes change almost hourly. I love cooking for friends and family. Few things make me happier. There is a cake I've made several times in the past year. I didn't develop the recipe, but it is always a big hit.

DIRECTIONS:
Vickie: I noticed there isn't any hot sauce in this recipe. Now that I'm thinking about it, maybe just a little wouldn't hurt. For those who don't know, Bell Bridge Books, Dolores' publisher, sent hot sauce with these labels especially made for Dixie Cowboy to Dolores because they wanted her to have a promotional item to give out until her book was released. 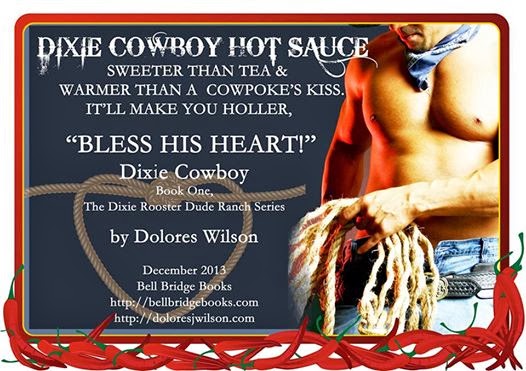 Vickie: Have you ever thought of writing a cookbook?

Dolores: Yes, I've thought a lot about writing a cookbook. Somehow, someway, I will eventually do that. I want to write a cookbook from Sweet Meadow First Baptist Church. Sweet Meadow is the town from my Bertie books. Recipes will be donated by the citizens who give Bertie a run for her money. I can't imagine what recipe Mavis and Millie and maybe Booger Baily would submit for the cookbook.

Vickie: What's next for you in your writing future?

Dolores: Right now, I have two things going on. I'm working on a cozy mystery, with the hope it becomes a series. There will be several elements in the book that I will have fun developing--Heroine is a middle-aged widow who comes to the Mississippi casino left behind when her grandfather passed away. Hero is the attorney who is an associate in a firm that has handled the casinos legalities for years. The main problem is her grandfather left 20% of the shares of the casino to the heroine, 40% to his wife of 60 years (heroine's grandmother), and 40% of the shares to the old man's mistress who has worked at the casino for 40 years. Oh, yeah, did I mention someone left the severed head of a woman in a toilet? Like I said, I'm having fun, fun, fun.

The second thing is one of the most exciting things I've had happen in a long while. Salt Run Publishing will be re-releasing all three Bertie books at the end of summer. I've added 7,000 more words to the original Big Hair and Flying Cows, as well as a new character. If all goes well, I hope to do a 4th Bertie book in the near future. I'll keep you posted as to an official release date.

In the meantime, I am running a contest on my website. Here are the questions I'd like you to answer. What is your favorite cowboy romance, and what is the hero's name? Go to my website to enter. At the end of March, I will draw two names from the entries. One will win a signed copy of Dixie Cowboy, and one will win a special prize. 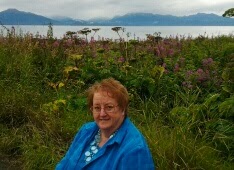 BIO
Dolores J. Wilson was born a coal miner's daughter in Morgantown, West Virginia, became a Florida transplant at the tender age of ten. In Tampa, she began her writing career when she and a cousin founded their own neighborhood tabloid and became the source for the juiciest news on the block. Their success, however short-lived, lay in their ability to sniff out gossip--or make it up. The locals were good-humored enough to take it all in stride. Or as Dolores suspects, she was simply too young to be sued for slander.

She went on to write articles for her junior high school newsletter and progressed to producing her first novel. The result was 300 pages of spineless hero, shy and mostly-in-hiding heroine, and remarkably dreadful prose. As a woman who realizes when she's in over her head, Dolores sought help through her local Romance Writers of America chapter, creative writing classes, and writers' conferences.

Along the way, she found her voice. She also found a devoted group of like-minded friends who became precious as family to her and shared their own skills, as well as what they had learned from their own experiences as authors. Her ability and confidence flourished, and Dolores' talent for writing sweet romance and Southern women's humor blossomed.

Dolores road-trips with her husband RW in their motorhome every summer. They meet up with friends and family along the way, enjoy bluegrass festivals, and Dolores serves massive meals from her portable kitchen to whoever shows up to eat. At home, she's the center of her big family, and she orchestrates big, messy, noisy celebrations for holidays, birthdays, weddings, and whenever she darn well feels like it.