A Writers' Corner doesn't just showcase the writer's room, it showcases the writer, as well.  See for yourself.


Published author of short fiction and non-fiction Sharon Drane isn't just an author.  She played Marilla Cuthbert in Anne of Green Gables (Nominated for a regional acting award for this, but lost to an actress who played the spider in Charlotte's Web.  Valuable lesson - never trust a spider.) and Countess de Lage in Clare Booth Luce's play, The Women, both at Sam Bass Theater in Round Rock, Texas.  Her parents' favorite role of hers was Bloody Mary in South Pacific.  Sharon won several theatrical awards in Dallas for directing and acting, and she is also a classically trained mezzo soprano, who doesn't sing much anymore, except in her car.  She appeared in her first play at six and continued until she reached age 60, when she directed her last production.

Now retired from the government, she is focusing on novel writing once again.  Currently, she is a finalist in two RWA chapter contests, Linda Howard's Award of Excellence for Unpublished Writers and Silicon Valley GOTCHA contest, which garnered an editor's interest so much that she asked to see more of Sharon's Regency manuscript. 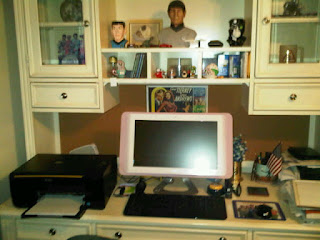 These days, Sharon can be found in her writing space, revising, editing, and waiting for that special e-mail to appear.

Check out the Star Trek items.  Some of Sharon's short stories were published in a science-fiction magazine primarily for Trek enthusiasts.

In junior high school, Elaine Burroughs fell in love with writing and the magical power of words.  Destined to put pen to paper, she never looked back.  Since then, she has become a published author of short fiction and is now pursuing the novel-length fiction market.  She has completed two women's fiction manuscripts, The Cinderella Haters and Desperate Stepmoms, as well as a ghost story that takes place in Savannah. 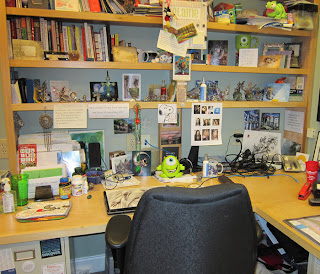 She is hard at work on a Paranormal Series where nature's elements (water, fire, wind/air, earth) battle the fallen angel clans to save innocent souls.


If Skye Taylor had to pick one of the 16 Master Archetypes to describe her, it would be a combination of the Free Spirit and The Swashbuckler.  She spent 2 years in the South Pacific as a Peace Corp volunteer, has jumped from planes, snorkeled over the coral reefs, climbed crumbling castle towers, crawled through lava tubes, and hiked over glaciers.  She’s a mom, a grandmother, and a writer.  She loves the Highland Games, Renaissance Fairs, and history, so it’s no surprise that she currently volunteers at La Taberna del Gallo on St. George Street in downtown St. Augustine, where she dresses out and works as a 1740’s tavern wench.  La Taberna del Gallo 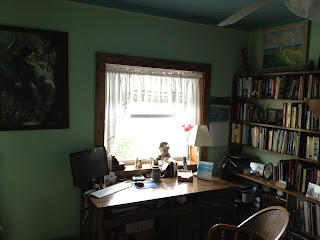 The window of Skye's study looks out over the Atlantic Ocean.  It's a perfect place to write.

Her Peace Corp articles, previously published in her local newspaper can be read on her website. Click on the following link to check out her website and the articles.     Skye Taylor

Her first novel, a political intrigue titled Whatever It Takes, was just released by Wings E-Press.  You can find her book on  Amazon.com,  Barnes and Noble, or at her Publisher's website, http://www.wings-press.com/

This is the writing space of multi-published author Dolores Wilson.  She has entertained us with her humor in her Big Hair and Flying Cow series, kept us guessing with her mystery Dark Secrets of the Old Oak Tree, and now her heart-warming book, Little Big Heart is available on Kindle. 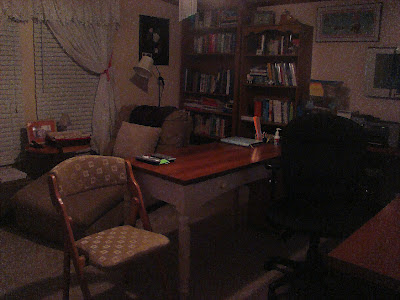 Below is a photo of Heather Waters' writing space.  Published books under her own name include The Devil's Possession and Destiny's Warrior, both historical romances.  (Devil's Possession has always been a favorite of mine.)  This space is where she pens her part of the Dark Breed Novels -- Ascension and Bedeviled, plus the e-novella, Before the Fall.  The Dark Breed Novels are written by the writing team of Heather Waters and Laura Barone, who write as Sable Grace.  Look for their upcoming interview on this blog. 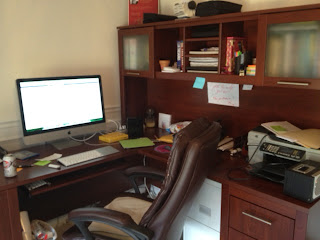 Click on the following link to take you to Amazon.   Bedeviled