1.  Tell us a little about yourself.

I am a happily married retiree living in the woods of North Florida, not far from the Suwannee River.  After successfully battling breast cancer in 2010, I reprioritized my life and retired from writing.  Or so I thought. Unfortunately, a writer never retires, so I still have projects.  However, I no longer sit for hours and hours at the computer.  I gave up my memberships to organizations that took up so much of my time.  But I still write when I'm not traveling in our mini-motor home.

2.  What inspired you to write your first book?

My first novel I wrote, which later became Running Scared (Medallion, 2008), began life as a story my running partner Marv Jones and I made up as we ran through the streets of Jacksonville to pass the time while we trained for a marathon ( I was younger and thinner then).  That one is the book of my heart.  Sadly, Marv passed away before he saw it in print.  I dedicated the book to his memory and gave a character his name.

3.  When you sold to an e-book publisher back in 2001, did you ever imagine then that e-readers would be as popular as they are now?

Yes, I did, but I knew it would be awhile.  It took big companies like Barnes and Noble, who bought out the online e-bookstore Fictionwise.com, and Amazon.com to standardize formats and popularize e-reading.

4.  You write romantic suspense, and you're a cookbook author.  Which is your favorite?

Romantic suspense is more fun to write.  I get to kill people!  Cookbooks are a lot of work and take months of kitchen-testing recipes.  But I enjoy both.  Currently, I am working on a new RV cookbook.

5.  Where do you come up with all your recipe ideas?

I love to watch cooking shows.  Even before there were Food Network and Cooking Channel, I watched programs about cooking and nutrition on PBS.  I never was much of a cook, but I wanted to learn and improve.  For the most part, though, these TV chefs use too much fat and sugar.  I started inventing healthier versions and soon had a cookbook's worth.

6.  Tell us about your cookbook, Recipes for Recovery?

I wrote Recipes for Recovery while recovering from chemotherapy and radiation treatments which left me weak and anemic.  So I reinvented many of my favorite recipes using convenience items to eliminate work and added ingredients to bump up the nutrition.  I self-published to keep the price down, intending it to help other patients who needed to cook for energy when they had not energy to cook.  Surprisingly, healthy people who don't want to spend time cooking healthy meals are buying the book.  So I guess I should have titled it something else, like "Cooking for Kitchen Phobics." LOL.

7.  What is your personal writing goal?

I feel a calling to write for the inspirational romantic suspense market.  I started a book during NaNoWriMo, working title Momma Cried, but have only six thousand words so far.  I need to do more plotting first.  NaNoWriMo is for people who can produce word count without editing.  That's not my preferred method of writing.  Perhaps if it were, I'd be more prolific.

8.  What is your current work-in-progress, and can you summarize it in a few lines?

When Stacy finds herself fifty years in the past, she enlists the help of a young GI, unaware that his future is tied directly to her time-jump.  Sgt. Bradley doesn't know if Stacy is a nutcase or a Soviet spy, but he does know he is in love with her.  Stacy soon discovers she must choose between her future . . . or his life.

9.  What is the strangest thing that ever happened to you while you were at a book signing or giving a presentation?  What is the funniest?

The strangest and funniest was the book signing at a historic inn, where the owner set me up in the garden a ta concrete umbrella table.  The shady garden quickly lost its charm when I was attacked by biting ants.  Huge biting ants!  Also it began to rain, but I had to stay put because the inn was locked.  The owner said she'd had a fire and couldn't let anyone inside until the renovations were complete.  That meant holding my bladder, too.  The umbrella under which I took refuge had dozens of holes.  I moved my books to the protection of my briefcase, but I got soaked.  Huge friendly cats seemed to want to sit in my lap.  I like cats, but these had dirty paws from the rain.  To add insult to injury, I didn't sell a single book!  But it made a funny story when I later shared it with my writing colleagues.

10.  Describe your writing space, that one corner of the house that's all yours.

I write in a spare bedroom that has more room now since I got rid of a thousand books.  After I converted to Kindle, I donated all but my keepers to nursing homes, libraries, and friends.  I moved in a sofa, so my space seems friendlier, too.  Beside my desk hangs a collage that my writing buddy, Judy Peters, made me one year for Christmas from photos of our various conference and writing events. 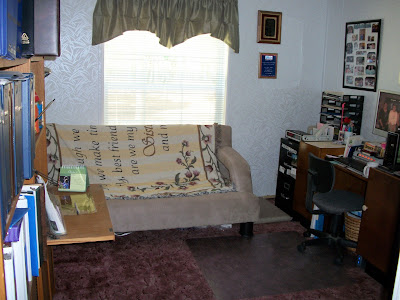 11.  What or who has been the biggest influence in your writing career and why?

I've had so many influences, but I'd have to say Vicki Hinze.  I won a first chapter critique from her at a writing conference.  She gave me much more than my money's worth!  I credit her for helping me sell my first mass-market novel, Restore My Heart.  She gives writing instruction generously through her blogs and at conferences.  I'm a fan of her books, too.  She's a talented writer who teaches by example.

12.  What are you most proud of accomplishing?

Mastering the art of making gravy!  It's not that I had tried and failed; I'd never tried.  I just bought a jar of turkey gravy for Thanksgiving, or used condensed cream of chicken soup as chicken gravy.  Now I can whisk up gravy and sauces and I get compliments.  My mother-in-law is so impressed and tells everyone what a wonderful cook I am, all because I now can make gravy.

13.  What is the most important advice you could give another writer?

Patience.  Unless you're James Patterson or Nora Roberts, you aren't going to write a book and sell it this year with a release date in twelve months.  It takes critiques and feedback, rewrites and revisions, editing and more rewrites to polish a manuscript.  It took me seven years of writing before my first novel was released, and that's not unusual.

Things, not people, right?  I'd have to say my Vitamix® machine, my TreadClimber®, and my Kindle Fire.  The first two keep me healthy and the third keeps me happy.

Thank you, Cheryl for a great interview!

Visit Cheryl at her Web site and the following links:  cherylnorman.com
Twitter


Cheryl Norman earned a BA in English at Georgia State University in Atlanta. After a career in the telecommunications industry, she turned to fiction writing and won the 2003 EPPIE award for her contemporary romance, Last Resort.  Her debut with Medallion Press, Restore My Heart, led to a mention in Publisher's Weekly as one of ten new romance authors to watch. Running Scared, a romantic suspense set in Jacksonville, Florida, and Washington D.C., received a Perfect 10 from Romance Reviews Today. Reviewer Harriet Klausner calls her writing "Mindful of Linda Howard ... "

Cheryl has combined her passion for writing and healthful cooking by publishing three cookbooks. In addition to writing, Cheryl works with breast cancer survivors to raise awareness about early detection and treatment of the disease. She also helps writers with grammar via her Grammar Cop blog, newsletter articles, and workshops.

Her latest romantic suspense novel is Rebuild My World. The story stands alone but revisits characters from Reclaim My Life and Restore My Heart. She is currently revising a time-travel manuscript, a departure from her usual romantic suspense work.
Posted by Vickie at 9:01 PM